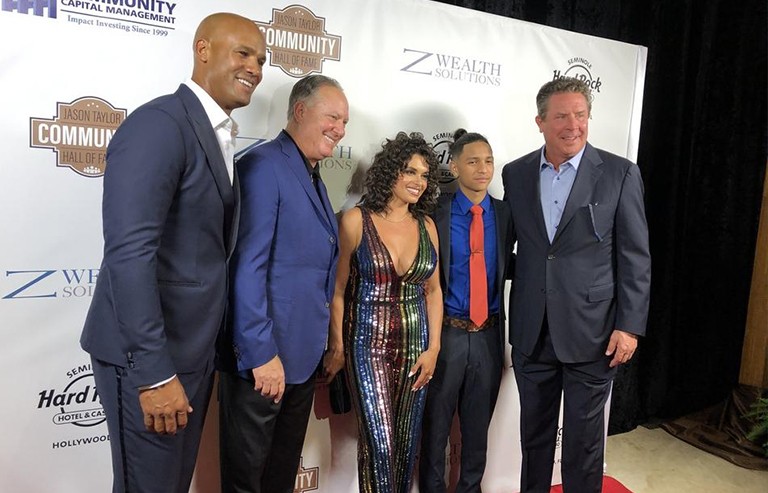 HOLLYWOOD — Jason Taylor, who built a Hall of Fame career out of chasing quarterbacks better than any other Dolphin, likes the way the team just chased down its potential franchise passer, Josh Rosen.

And another Hall of Famer in the team’s history who knows something about quarterbacks — Dan Marino — also gives a thumbs-up to the move.

Taylor and Marino spoke Friday night at the Seminole Hard Rock Hotel & Casino, where Taylor and his foundation were hosting the inaugural Jason Taylor Community Hall of Fame Dinner.

“I thought it was a great move,” Taylor said of acquiring Rosen. “You get a one-year look-see, see what’s under the hood. And if you don’t like it, you can change it.

“If you do like it, then you can change the tires, put some custom wheels on it, keep riding that thing out.”

The Dolphins obtained Rosen from the Arizona Cardinals during the NFL Draft, giving up a second- and fifth-round pick for a player who went 10th overall a year ago. Rosen will compete with veteran Ryan Fitzpatrick for the starting job.

Marino, asked if he found Rosen to be living up to his reputation as a smart, studious quarterback, said, “All that stuff. He’s been working hard. Yes, he has.”

Both men sounded enthusiastic about the strategy of owner Stephen Ross to build the Dolphins from the ground up, through the draft, and with an eye on sustained success.

“I spent time there, so obviously I’m proud of the Dolphins,” said Marino, an advisor to Ross who regularly attends practice. “I want to see us do well. I think we’re in a position where we can get to that point. We’re building to have a successful team.”

And not just successful in the future.

Taylor seconded that. He recalled the infamous “Suck for Luck” mantra tossed around Indianapolis when quarterback Andrew Luck was about to enter the draft. There isn’t much Taylor finds more distasteful than the concept of tanking.

“You know how I felt about that, and I almost got myself in trouble for saying words that rhymed with his name,” Taylor said. “Whatever. You can’t tell an athlete that you’re going tank it, you’re going to suck, you’re going to lose games to get draft picks. Players don’t want to hear that. They’re not going to try to lose. It’s as simple as that.”

General manager Chris Grier dealt for a possible answer to the quarterback question while also stockpiling picks for next year to give new coach Brian Flores talent to work with.

“I understand where Chris is going and B-Flo is going,” Taylor said.

Taylor pointed out that players have a small window to play in the NFL and are only programed to want to win now.

“If you told me we need to stink to draft somebody that may or may not work out — because it’s an inexact science — we need to win three games and lose 13 of them, so we can pick, I’ll tell you where to go,” Taylor said.

Marino and Taylor are two former winners of the NFL’s Walter Payton Man of the Year Award, and Friday night was about honoring Marino, Anthony Borges of Parkland’s Marjory Stoneman Douglas High and Scott Scherr, president and CEO of Ultimate Software, for their community service.

Borges was credited with saving many of his classmates’ lives during the tragedy at Douglas in 2018. He was shot five times.

“I’m getting this award tonight but I’m probably more proud to be here in his presence,” Marino said. “A young kid like that, Anthony. Went through all that they went through that day — for him to be the hero that he actually is, and for me to be here with him — a special night for me.”

Taylor recalled visiting Borges in the hospital during his lengthy recovery.

“You talk to him a little bit and you understand what he went through,” Taylor said. “And seeing where he was a year ago and where he is now, is pretty amazing.”

“By far,” Taylor said. “I was never comfortable when I played with people saying athletes are heroes or celebrities are heroes. I never understood that. To me it was always the men and women in the military that laid their lives on the line for this country or people like Anthony and the hundreds of other kids who dealt with what they did a little over a year ago.”