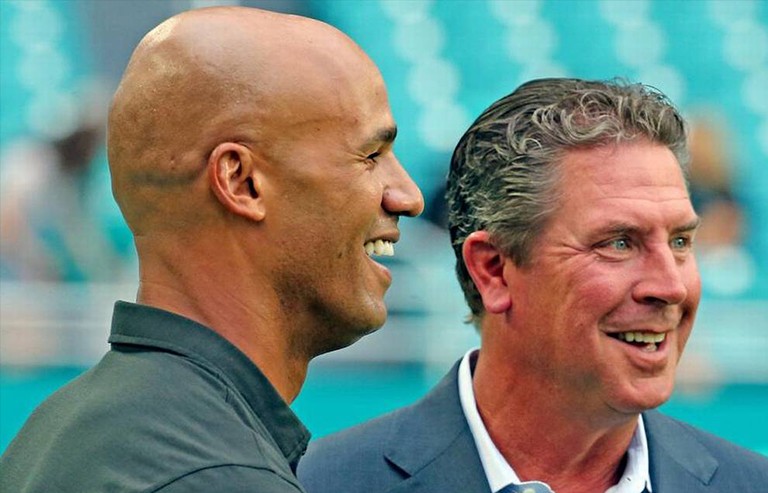 Dan Marino and Jason Taylor, the two most accomplished Dolphins players of the past quarter century, were reunited Friday for a festive Taylor charity event that honored both the Hall of Fame quarterback and a hero of the 2018 Stoneman Douglas shooting.

And during separate interviews, the two Dolphins legends and Pro Football Hall of Famers touched on numerous topics, from Josh Rosen to the franchise’s current state to their enduring bond.

Some highlights from the event at Seminole Hard Rock Hotel and Casino:

▪ Marino — who spends a lot of time around the Dolphins quarterbacks and the team’s front office and coaching staff in his role as a special advisor — indicated a positive early impression of Rosen.

Asked if he has come across as smart and studious, a measured Marino – who’s often in the QB meetings – said: “Yes he has. All that stuff.”

What impressed Marino about him watching him play at UCLA and Arizona?

“The thing I would say about Josh is he has real arm talent,” Marino said.

“Something a lot of guys in last year’s draft had. The other guys had very good arm talent too.”

Taylor – who’s an NFL analyst for Westwood One radio and defensive assistant at St. Thomas Aquinas – endorsed the Dolphins’ acquisition of Rosen for second- and fifth-round draft picks.

“I thought it was a great move,” Taylor said. “I thought [Dolphins general manager] Chris Grier and the Dolphins did a great job getting a guy that really didn’t fit in the system anymore in Arizona, with them drafting Kyler Murray, and it made sense. I’m one of the guys that believes you probably need to draft a quarterback every year in the draft and replenish that.

“You get a one year look-see [at Rosen] and see what’s under the hood. If you don’t like it, you can change it. If you do like it, you put some custom wheels on it and keep riding it out.”

▪ Asked what he thought when he heard the Dolphins were going to take a step back and rebuild, even if it meant sustaining short term pain, Taylor offered a candid and comprehensive response:

“You were around in 2007 [when Miami went 1-15],” he told me and two other South Florida sports journalists, and then referencing the 6-10 season in 2011 when the Dolphins failed to land the top draft pick in 2012 (quarterback Andrew Luck).

“That whole suck for Luck thing,” Taylor recalled. “So as a player, you know how I felt about that. I almost got myself in trouble for saying words that rhyme with his name, Luck. You can’t tell an athlete you’re going to tank, you’re going to suck, you’re going to lose games to get draft picks. Players don’t want to hear that. They’re not going to try to lose.

“What you do upstairs, if you’re trying to create a strategy or philosophy going forward for continued success, sustainable success, I understand that from a business side of things and a football business side of things. You need to prepare for the future. You build in this league by drafting, not by signing guys in free agency.”

Taylor was just getting started.

“If you told me we need to stink to draft somebody that may or may not work out – because it’s an inexact science – we need you to win three games and lose 13 of them, so we can pick, I’ll tell you where to go and it’s not to my event.”

▪ Marino, asked about being part of a building process, made clear that winning this year should remain a goal.

“I spend time there and want to see us do well,” he said. “We’re in the position where we can get to that point – where we’re building and have a successful team. I look at it, ‘Hey, we’re trying to be successful right now, win games and compete each and every week.’”

▪ Taylor’s charitable event, which has raised more than $7 million over the years, is transitioning from holding a golf tournament to an evening event honoring members of the community for an on-line only “Jason Taylor Community Hall of Fame.”

Marino – who has done philanthropic work for decades in South Florida – received Taylor’s first-ever celebrity award, and the two treasure their friendship, which has sustained even though their Dolphins careers overlapped only three seasons (1997-99).

“I came into this league in 1997, looked up to Dan like he was God,” Taylor, 44, said. “Had a chance to play with him and be friends with him forever and learn so much from him. To go full circle and be able to honor him now at my own event that I [developed] because of things he did and things he showed me and taught me is crazy. It really is. It makes you feel old.

“Having a 16 year old son driving and me honoring Dan 20 years after I got here, this is really cool to me. Don’t tell him I said that because I don’t want to let him know I still look up to him like that.”

Marino, 57, put it this way: “I remember Jason coming in as a young guy out of college [at Akron]. One thing I knew is he was from Pittsburgh and I was from Pittsburgh. We had that kind of built-in relationship right off the bat. He was such a contributor for years. You look at that young kid and now he’s a Hall of Famer and the great player and person he is. I’m proud to be a recipient of his community service award.”

▪ Also honored was Anthony Borges, the teen credited with shielding 20 classmates during the Parkland school shooting last year. Borges, shot five times in the incident, used his body to block the door to a classroom full of students as gunman Nikolas Cruz fired shots with an AR-15-type rifle.

The Feb. 14 massacre at Marjory Stoneman Douglas High left 17 dead and 17 wounded, and Borges was among the most seriously hurt. Bullets pierced his lung and abdomen and struck him three times in his legs. He spent more than six weeks in the hospital, underwent nine surgeries, spent time on a respirator and had one third of his lung and part of his intestine removed.

“When that unfortunate situation happened, we went to the hospital, had a chance to visit with him and spend some time with him,” Taylor said. “Fast forward a year. We started putting this [event] together. We looked for a celebrity honorary and a youth honorary and you can’t help but put Anthony’s name first. You talk to him and seeing where he was a year ago and where he is now is pretty amazing.”

Said Marino: “I’m getting this award tonight. I’m probably more proud to be here in [Borges’] presence. He’s a hero.”

Also honored; Scott Scherr, founder and CEO of Ultimate Software, the South Florida based company. Marino, Borges and Scherr were honored “as three individuals who inspire [Taylor] to carry out the JT Foundation mission.”

“It won’t have the same cache as the Pro Football Hall of Fame. They won’t get a jacket, won’t get a ring. We can’t afford all that. But we will honor them for a night and remember their contributions to the community, to their industry, to society, forever.”